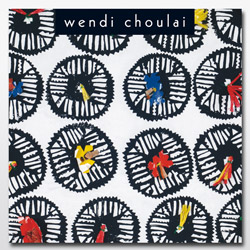 This beautifully produced book showcases the work of Wendi Choulai, one of the Pacific region’s most significant textile designers. Born in Papua New Guinea and educated in Australia, Wendi Choulai was at ease in both worlds, but drew inspiration from the ritual, dance and grass skirts of her Papuan Besena (extended family). She was the first female graduate in Textile Design from the National Art School in Papua New Guinea, obtained a Master of Textile Design from the Royal Melbourne Institute of Technology and exhibited widely, including the Asia Pacific Triennial in Brisbane with dancers from her Besena.

“Wendi Choulai not only understood that culture was not static, but as a woman with strong beliefs and determination, she actively participated in fast-forwarding its evolution. She turned her energies to investigating how she might incorporate traditional designs into her practice without ‘devaluing’ their original meaning, which was bound inextricably into the ritual of her clan. In addition to confronting the chaos of difference, the third space, she successfully and concurrently negotiated boundaries of gender equality, generational and geographical distance.

Choulai returned again and again to the grass skirt as a textile garment, an icon of ritual and a means of conveying her ideas. For her, the skirt was a metaphor; multi-layered like the overprint, it incorporated traditions and, through interaction with her clan, provided opportunities for legitimate innovation, the past and the future, inseparable and cohesive. In the third space Wendi occupied a privileged position that she recognised as both an opportunity and a responsibility.

Her premature death in 2001 was a tragic end to an immensely creative and intelligent spirit, but through the legacy of her work, her narrative and purpose will continue — she would wish it to, and the world needs desperately to hear her voice, that cautions us to remember the motto of her clan: ‘Aina asia mavaru kavamu’ — We don’t dance for no meaning.” From the Introduction by Jill Kinnear