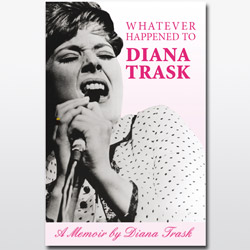 Whatever Happened to Diana Trask

Whatever Happened to Diana Trask - Paperback $29.95

This is the story of a beautiful young girl from Melbourne with an outstanding voice who is invited to tour Australia as a support act for Frank Sinatra in 1959. She accepts his advice to try her luck in the USA, and at the age of eighteen flies alone to New York to make her debut at the famous /Blue Angel Night Club/.

Diana succeeds in popular music and then re-invents herself to carve out a new career as a successful country singer, touring the world and performing for fans in the USA, UK, Europe, Australia and Japan. But, it was not all smooth sailing.