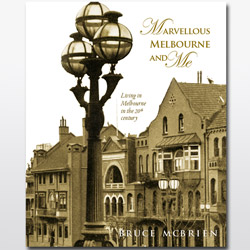 Bruce McBrien has enjoyed a virtual love affair with Melbourne and its environs almost since the day he was born. Bruce experienced first-hand life at the top of Melbourne's social strata in the early 20th century. In rich detail, he describes his childhood years living at the Harrison House in Spring Street, and paints a vivid picture of inner-city Melbourne in the early-to-mid-1900s. His family's social standing gave Bruce a rare perspective on Melbourne life, as is illustrated through his many brushes with iconic politicians and celebrities over the years. Bruce McBrien spent much of his life working as a musical theatre actor and is a passionate supporter and long-serving volunteer of the National Trust of Victoria. Marvellous Melbourne and Me details not only the varied life of the man, but also that of his city. Over the years Bruce has made a collection of newspaper clippings, photographs, invitations, artefacts and memorabilia, some of which have found their way into this publication.